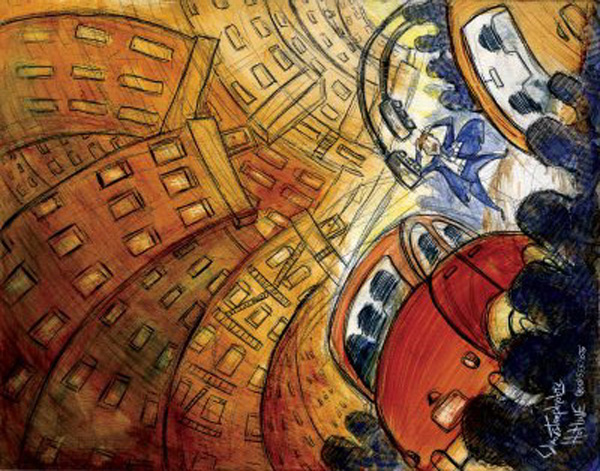 Becca: Guess what?
Me: (struggling out of stupor) Oh dear, what?
Becca: Jeremy knows you! And he knows Afham too!
Me: What? How?
Becca: You know last night I told you our plans to go to Rootz were scrapped because we had to go to Phuture? Turns out we were going to Phuture to meet your friend, that Shaun Leong!
Me: (now fully awake) What? How does he know Shaun?
Becca: I don’t know! When I met him I said, “I’ve heard of you, from Sandra and Afham,” and then Jeremy pounces on and goes, “Wait, how do you know Afham?” And I said, “His girlfriend is my best friend!” And then he asked, “What’s his girlfriend’s name?” And I said, “Sandra,” and he goes, “Sandra what?” and I said, “Sandra Foo.” And he said, “Wait, isn’t that a Chinese name? I’ve met her. Afham’s girlfriend doesn’t look Chinese.”
Me: Are you sure he meant me, and not some other girl from Afham’s patchwork quilt of relationships past?
Becca: Well, look, you don’t look Chinese when you have a full face on, so I’m sure he meant you. Either that, or he met some other girl on a night when you weren’t out with Fham, but let’s not be pessimistic.
Me: But when I told him you were coming to Rootz but then switched to Phuture, I mentioned you were going with Jeremy, there appeared to be no ringing of bells.
Becca: To be fair, it’s quite a common name. Plus he said that he’s known Fham for ‘years’, so they must know each other quite well, even if one doesn’t quite remember the other.
Me: Wow. Wow. First Yu Tim, and then Paul Poh, and now Jeremy Chan. Our worlds have collided, which means they’ve become too, too small. This is very bad.
Becca: I know. The world is not safe anymore.

This is one of the reasons I didn’t want to come back to this country. In the U.S. I would have been safely living in obscurity, meeting new people wherever I went without running the risk of bumping into people from the past. But if you live in Kuala Lumpur and have even some semblance of a social life, chances are the circles you run in will contain people that you knew from years ago and are now frantically trying to forget. In the (almost) ten months that I’ve been in this relationship, I’ve reconciled with people I haven’t seen in a good thirteen-odd years and felt somewhat glad that I’ve seen them again, met entirely new people altogether, discovered a few of them are related to some good friends I’ve had, and run into other people who know them whom I had, until then, successfully blocked out of my memory.

Afham thinks he probably knew the man in question from his Sunway College days. I suppose to find out now that someone my best friend sort-of dated back when she was seventeen also happens to know my boyfriend and appears to have met me before, despite my complete failure to recall ever having met him, probably shouldn’t have surprised me; if anything, it only makes me look bad for the measly amount of attention I pay to others around me.