“How in one night have we come so far?” – Kim, Miss Saigon 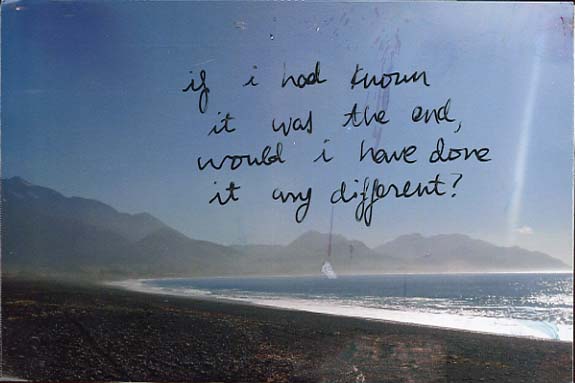 Standing on the deck, looking out at the clear, inviting waters of Tioman Island and breathing in the fresh sea air, brought about a sense of contentment I haven’t felt in a very long time. For the first time in months, maybe even years, the feeling that all was well in my life — or as well as it could go, as unrealistic and unlike me as it seemed — appeared more present than ever.

Then I looked down, something I did very often over those three days, and felt again the old wave of sadness wash over me. But at some point, that wave of sadness was replaced by something resembling more of wistfulness. The thought of keeping them away in the top shelf of my closet for more than a year, too pained by the sight of them to even think about having them as a part of my life, seemed so terribly distant now, and, in a macabre way, so terribly amusing.

Sometimes it’s difficult to believe how far it has all come. From the little secret smile of a new beginning, to the giddy thrill of hopes so high they seemed impossible to fell, to all the rage and frustration of playing a game I was too tired to play and didn’t know the rules of, and finally to the resignation of surrendering to a losing battle, it’s definitely been one very large, very full circle.

And yet, when faced with the question of whether I would do it all over again, or do it differently, my answer would now be of less certainty than before. Where once, long ago, I would have readily risked everything to fix the mess I had made, fully accepting of the circumstances and determined to prove that I could be good enough, now I’ve learned to look at the bigger picture, and come to realize that some things can only be fought for for so long, before all ego and pride must be set aside and defeat be admitted. And I know now that I wouldn’t do anything differently, because it was all the unfortunate circumstances that drove me to bring myself to where I am today.